The Tallest Man on Earth (known in the real world as Kristian Matsson) returns for his third full length album, There’s No Leaving Now. This is Matsson’s first slice of new music since his 2010 EP, Sometimes the Blues Is Just a Passing Bird, and he has clearly spent the almost two year hiatus reinventing his sound.

I assure you that you can find the core attributes of The Tallest Man on Earth here. The Bob Dylan and Woody Guthrie style vocals and the usual acoustic guitar with captivating power . But Matsson slowed down his sound drastically and threw us a curve ball with various 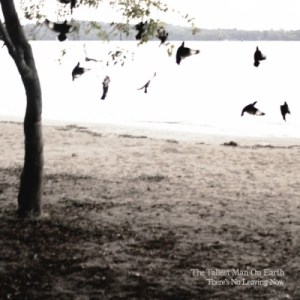 layers of lesser heard accompaniment. “To Just Grow Away”  is the opener on the album, and it readily exposes listeners to the new sound. The song features multiple guitar tracks, along with an undertone of piano. There is a stronger emphasis on slower opening riffs than usual, seen also on second track “Revelation Blues”. This song brings back some aspects of Matsson’s earlier works, but still doesn’t reach the speed and urgency featured in The Wild Hunt. “Leading Me Now” is approached in such a relaxing manner, but the intricate designs of Matsson’s songwriting is still wildly apparent. It makes his desire to redesign his sound clear, and it also opens a door to really get you involved in this album.

“1904” is the first single off of There’s No Leaving Now for a reason; this is The Tallest Man on Earth at his finest. It is a perfect example of his gripping vocal melodies and guitar strumming that helped him build his fan based, again mixing with his desire to change his modern-folk style. The next track “Bright Lanterns” establishes more of a twang, and it brings this album a taste of more current country music while retaining Matsson’s throwback folk roots. It also works to establish a big part of the emotion put in to the writing of this album, which is backed up by the piano ballad and title track, “There’s No Leaving
Now”. The song paints a picture of entrapment and internal struggle. The result is crippling of all emotions, and leaves you wondering what Matsson is trying to escape.

“Wind And Walls” is what every fan of  The Tallest Man on Earth’s older sound was hoping for. It is as energetic as all of the albums preceding it, and Matsson straightforwardly embraces his more traditional sounding folk for the first time on this album. “Little Brother” has a similar effect, but again moves towards the changes made throughout There’s No Leaving Now. “Criminals” is a great example of Matsson’s songwriting and talent, with a nicely layered guitar part and lyrics that are full of great metaphors and historical references while still creating a legitimate story. The album is then anchored by “On Every Page”, a slower but confident song that nears five minutes.

Kristian Matsson’s musical identity The Tallest Man on Earth has played a significant part in putting modernized folk on the map in today’s music scene, while still keeping ties with his musical influences of more traditional folk music. There’s No Leaving Now is a stretch from his usual sound, however a generally solid album that holds the same value of songwriting nonetheless. It gets an 84/100, and you can get it now.