← Nutshell Album Review: The Tallest Man on Earth – There’s No Leaving Now
Top Albums To Look Out For → 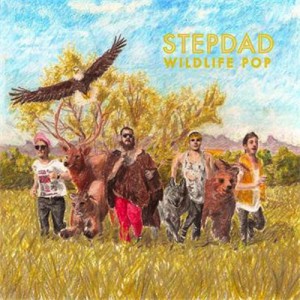 In an enviornment that embraces weird song names, ridiculous album art, and music that helps you visualize LSD-style hallucinations, the Grand Rapids-based Stepdad is caught right in the middle after shipping off the two year old Ordinaire EP, complete with an angry lion/bear as a cover and songs with titles like “Wolf Slaying as a Hobby”. To make their debut LP Wildlife Pop even more enticing, the five-piece has been described as “8-bit power pop”, and listeners won’t be surprised to hear that they got their big break from writing a theme song to the popular web comic “Axe Cop”. Backed with a Kickstarter funded album and a full ride to the 2012 Vans Warp Tour lineup, Stepdad is preparing themselves to become an indie sensation.

“Must Land Running” is what kicks off the album, a song that instantly takes me back to Lollapalooza 2010 when a younger version of me was dancing at the Budweiser Stage to indie three-piece band, Yeasayer. With keyboards and looped effects very reminiscent of Yeasayer’s Odd Blood, Stepdad is able to kick off Wildlife Pop with a bang. To follow is a track taken from the Ordinaire EP titled “Jungles”, which is a lot less dance worthy and could draw comparisons to M83’s Saturdays = Youth days. “Show Me Your Blood” is another one to back up those comparisons, along with an added touch of original loops and drum beats.

“Mystery In The Faking” is another track on this album with an original and exciting sound, sprinkled with squarebass and synth leads that would make the jaws drop of Passion Pit fans everywhere. “Will I Ever Dance Again” is a wildcard on the album, but is really the first taste of that “8-bit” I mentioned earlier. This song sounds like it could be the soundtrack of Rainbow Road on Mario Kart 64, and the foot tapping is inevitable. The “power pop” part from earlier enters in “To Ribbons”, a song full of great riffs, solos, and samples played by too many great instruments to list, all with a strong synth bass and drum part underneath. My answer to next track is “My Leather, My Fur, My Nails” is just “wow”. Not only does this song successfully make me think of nothing but Megaman, but it has such a catchy melody and great beat that people near me when I wrote this review started quietly dancing. “Pick & Choose” is a song so packed with obvious musical influence, I don’t even know where to start. So we’d both be better off if I did this the lazy way and just allowed to you listen to it and decide for yourself.

“Starfriends On Earth” is another one to cause the body to move unwillingly, but for good reason. This song has just about everything, my favorite aspect being the driving force of the snare drum leading the fast-paced tempo through this adventure of a song. “Treasure Hugs” opens with animal noises, which I was surprised took this long to be included. This song, along with “Exploring” had a large emphasis on a “start, stop” style, which was done well with a backup of nontraditional percussion and effects. The album closer “Warrior (Jungles Part II)” really closed the deal for me on this album by tying it up really nicely back with the beginning tracks.

Stepdad’s obscurity and quirkiness is something that had me skeptical at the beginning of this album, but I was pleasantly fooled. The vocals are reminiscent of many electropop to precede them and the sounds may blend together more than desired, but not much more could be asked of a generally new band. Besides, you aren’t doing too bad if there’s only one or two legitimate issues in your first LP. Wildlife Pop is a very well put together album that puts Stepdad at the top of my list of “Bands that will own the music business one day”. I’m expecting to see a lot of good things go their way, and the 2012 Vans Warped Tour is a pretty solid start. Wildlife Pop gets a 90/100, and I’d grab a copy now so you can tell all of your friends that you listened to Stepdad before they were famous.

← Nutshell Album Review: The Tallest Man on Earth – There’s No Leaving Now
Top Albums To Look Out For →