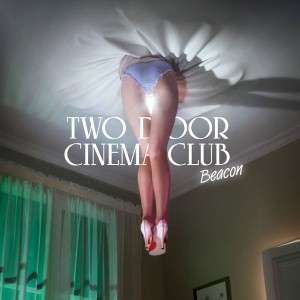 Sighs of relief have erupted as the musical super month has come. September 2012 promised great things in the music industry, and other than Muse’s new album being pushed back to October, it hasn’t been a disappointment. One of the most exciting things was the return of the Irish, out-of-nowhere-super-indie-pop-dance-fun band Two Door Cinema Club with their second LP, Beacon. Following up an album like platinum-selling Tourist History is always a challenge, plus I’m sure the trio was just peachy about adding the second-album jitters to that. But they came out swinging, and you couldn’t expect anything else from the 2011-2012 festival staple, who spent more than enough time teasing fans that they were more than ready to put out a new album (and the release of random, just-for-kicks single “Hands Off My Cash, Monty” sure didn’t help). Sure enough, the final product is mind blowing, and never has it been more clear that the industry may be too easy for one particular group.

“Next Year” is a phenomenal opening track. First off, this is the only time that I will not call house synths like this corny. It was done in a magical way, and if you had the 15 seconds of buildup and held breath before the song turns into something the fans were waiting for, you’re golden. “Handshake” is the next song, quickly recognizable as the teaser track released months ago with the album’s promo video. This song also heavily features the token Two Door Cinema Club sound, with the poppy guitar riffs and upbeat drum tracks. It also marks the beginning of a trend throughout the album of a larger emphasis on bass and vocalist Alex Trimble hitting lower notes. “Wake Up” has a groove to it that hasn’t yet been heard from the Irish trio, with Trimble cranking out Thom Yorke-style vocals on the verses and gritty rock solos used to transition between choruses and verses. “Sun” has a pretty opening that turns into a slowed down, but equally fun version of a Two Door song. It takes a melting pot of everything heard on Tourist History, adds a horn section, and slows down the tempo to create a very unique track. Nonetheless, it stands out and is definitely a track to look out for.

“Someday” explodes into a thick fog of the sound the band made famous two years ago. The almost-synth-pad guitar sounds and fast drums sound almost identical to their earlier sound. “Sleep Alone”, the album’s first single, is another song that quickly draws comparison to the band’s early work. It is one of Beacon‘s powerhouse songs that you can expect to be hearing for a long time (and don’t worry, it’s already hitting radio stations). “The World Is Watching” has a very different, almost beachy sound to it that is reminiscent of Young The Giant. A song with a catchy riff, huge percussion support from the toms, and multi-range vocal harmonies (including female guest vocalist Valentina), this is a song that is sure to stick in your head and remind everyone that they’re mad about Summer’s end. “Settle” starts very subdued, and shows Two Door’s mastery of the big explosion. It is able to take the most quiet and subtle verse part of the record and turn it into the most powerful chorus in a matter of two beats. Then to top it off, it manages to toy with the muscles in your legs for 4 minutes, wondering if and when you’ll start dancing again.

“Spring” is another diverse track with a groove, with another big emphasis on the bass part. The musical interludes are extremely memorable and recognizable, along with with entrancing lyrics (“One more day is not enough”) that are truly just adorable. “Pyramid” is another slow starter, with the groove mentioned before combining with a solid house-style build up. The kicker is that it instead erupts in normal fashion for these three, only to drop back down to the jazzy-groove level shortly after. It isn’t until around the 2 minute mark that you hear the song hit its stride and retain its power in common electro-pop form. The album then closes with title track “Beacon”, a song that seems like the ball of a six-way ping pong match, where each player is a different end of the spectrum Two Door Cinema Club has touched upon.

With a month as big musically as this one is shaping up to be, there are some generally big albums that just need to be skipped over due to exponentially bigger albums, and Beacon seemed to fall in the irritating purgatory of “no one really knows how this is going to turn out, do they?” Two Door Cinema Club is part of the gargantuan handful of this generation’s underrated bands, and they proved to the world everything else they needed to that was leftover from Tourist History. The Irish trio not only proved that they are the princes of European electronic indie pop (and apparently 3-4 minute songs that start with the letter “S”), but also that they know how to cut a new, interesting, and just generally awesome album. Twice. Beacon takes a commanding 94/100, and you can get your paws on your own copy today.